The IoP in Scotland is putting on a rich catalogue of online CLPL for the community of physics teachers, and presented by colleagues from that same community. I accessed one of these after the event, because it had been recorded and published by Drew Burrett on YouTube.

This session was hosted by Stuart Farmer and Jenny Hargreaves, and presented by Murat Gullen and Martyn Crawshaw, who gave us a practical introduction to using tools for data capture and analysis using the suite of sensors on most modern phones. They presented a brief rationale, acknowledging that although not all children have a smart phone, most have access to one. The scope (pun intended) for teachers to offer practical sessions using their own equipment was also underlined.

The first tool discussed was PhyPhox which not only can access all of the phone’s sensors, it has a number of built-in activities and tools to make use of the data captured. These can be exported in several formats, or posted to Dropbox for later discussion. What I hadn’t realised is that there is a built-in web server accessed through the “triple dots” at the top right of the phone screen which enables display and control of the app from any nearby browser, provided that the computer is on the same network (it uses a 192.168.x.x IP address). 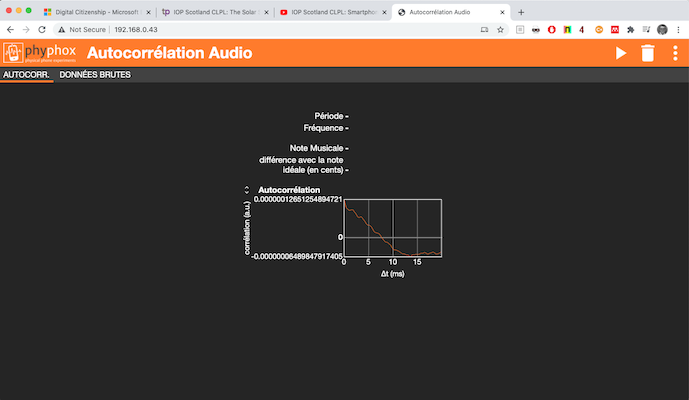 Martyn started by talking about Vernier video tracking and analysis software, similar to the java Tracker program. He went on to demonstrate Pasco’s SparkVue app, what Martyn called the “twenty-first century version” of Data Studio found in many schools. It allows connection to onboard sensors and also Pasco equipment in the lab.

It was made clear that teachers should take care not to assume that their pupils are tech-savvy enough to know how to use all of the tools and interfaces without support and guidance.

Excellent stuff, as ever, with a lively Q & A at the end. I’m going to share this with my students.