Jacob Straight was born on 23rd June 1741 in Richmond County, Staten Island NY and murdered by Indians in Monongalia County, WV in October 1786 with his father and Mother-in-law.

More Hood family stories. My Grandfather Harry Straight Hood’s Grandfather’s Grandfather’s fatherCorrected 5th April 2020, from GEDCOM data. This story used to be a generation out. Turns out that the Indian massacre is closer than I previously thought. The boy in the story was Indian Billy Dragoo - see below for more about him. Jacob Straight (with me so far?) was murdered by Indians in Monongalia County, WV. 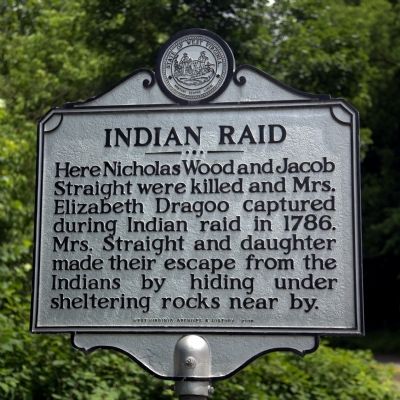 “As it began to grow dark and Mrs. Dragoo and her son, who were out in the cornfield gathering beans, did not return to the house, they knew they had been captured. Jacob Strait (sic.) and Nicholas Wood went to see if they could get any clue to their whereabouts, till they could get help from the fort. Strait and Wood had not gone very far until the Indians had shot Wood from ambush. Strait started to run, but the Indians dodged out in front of him stopping his flight. He held out his hands to them, showing them that he was not armed, and said, “I mean you no harm, don’t kill me and I will go with you.” The Indian gave him a grunt “Go with me” and raised the tomahawk and struck him. They took three scalps from his head. One from the top and one from each side of the back. He had black curly hair. The Indians were selling the scalps to the British. After the Indians left their victims, Mrs. Strait came out of her place of concealment and waded the river to the fort and gave the alarm. Mrs. Dragoo and her little son, captured by the Indians were taken to Ohio, but Mrs. Dragoo could not travel as fast as they wanted to go, so one morning the boy was taken on ahead and told that his mother was ill and not able to travel. Later they told him his mother had died.”

Mrs. Dragoo in the story was the victim’s mother-in-law. Her son in the story was William “Indian Billy” Dragoo. Another story, from findagrave.com, adds information linking the Dragoo family to the raid, attributed to Shawnee Indians (the Jacob in the following story is not Jacob Straight, but Elizabeth’s maiden name was Straight, so this is still a family story).

“When Jacob was about four years old, his mother Elizabeth was scalped and killed in an Indian raid in 1786, by about 9 Shawnee Indians, and his brother William (“Indian Billy”) Dragoo was also captured in this Indian raid, and he was then raised by the Indians. Elizabeth’s brother Jacob Straight, and a neighbor Nicholas Wood, were also killed in this raid. (Jacob’s mother Elizabeth was captured, and then scalped and killed later, at another location). Jacob’s brother William (“Indian Billy”) Dragoo later married an Indian squaw and became a “white” Chief of an Indian tribe.”

There is more of the story here, and a historical marker of the 1786 attack, in Marion County at the side of US 250.