This is the first in a series of posts containing my notes from a course on Statistics and (data) Visualisation with R, presented by Lucia Michielin of the University of Edinburgh. The course is running two days a week in June and July.

The course was presented in a blended form using Collaborate, Blackboard Learn and Slack. These represent three key elements in a remote learning environment:

The offline chatter and forum space is useful in courses like this, which is why Slack is such a useful tool here. Microsoft teams has been suggested as an equivalent to Slack but I really don’t find it intuitive or useful in the same way as Slack. The UI, as with all Microsoft products I have ever used, is difficult and intrusive.

The pre-course task is to install R and the R-Studio IDE. I painlessly installed on my Mac R 4.0.0 “Arbor Day” and R-Studio 1.3.959, and downloaded the data files for the first week.

This began with an introduction on The Edinburgh Centre for Data, Culture & Society (CDCS) and their other courses and research projects, followed by an introduction to our course leader, Lucia, and a walk around the VLE folders and files. Then, an overview of the first session:

This is fairly self-explanatory but an essential levelling for all delegates on the course, who come from a range of backgrounds. Most seemed to be researchers.

R is the language, and R-Studio is a graphical IDE for working with projects and data using R. Lucia said that the key skill in acquiring a new language is knowing how to Google: R is widely used and has a large user base and the forums are very helpful in quickly overcoming problems.

We heard about the scientific method and in particular the issue of correlation vs. causation. This, in context of remaining close to the process, and the meaning of the data, whilst engaging deeply with the IDE.

Getting our hands dirty

Finally we got to open R-Studio and follow Lucia through opening the script for today and take a walk around the IDE. We started with creating a new project and setting up a folder organisation for the course, then played with settings to make the IDE more comfortable for us.

Comments and header syntax was explained, then using an immediate mode of running commands in the console (by pressing cmd-enter). Outputs are presented in vectors: index 1.

Getting help is a matter of issuing a query command: e.g. ?datasets displays help on the Datasets package.

Packages are installed and activated thus:

We ended the session by installing something called the “Tidyverse”, which seems to be a collection of useful packages. It calls itself an “opinionated collection of R packages designed for data science”.

Class 2 - Types of data and Grammar of graphs

Reading a table by convention has variables in columns, and the observations or data values are in the rows. Vectors, arrays and matrices in R all must contain the same data type, and a data frame is the only construct that allows mixed types.

What looks like a continuation line in the above code block is called a “pipe”, written %>%. A pipe is much more than just for making the code look pretty: it really does work as a pipe to transfer a value between subsequent function calls. See this and this and this for more details.

After some warnings on selecting data presentation that is consistent with your intention to actually communicate something, and not to show off, Lucia introduced us to some of the graph types available with R. She gave us a really nice demonstration why many journals prefer data presentation (e.g. ratios) as a bar chart rather than a pie chart. Differences are sometimes clearer in the bar chart. Apparently, Florence Nightingale invented the pie chart!

The Grammar of graphics

The ggplot function allows the creation of graphs according to the framework outlined by Wilkinson1 in which the separate aspects of data presentation are dealt with separately. A basic template is described here with examples for ggplot. My take on the framework is:

Some of these map into the ggplot function, from the most basic (using examples from the weekly challenge, below):

Here, the aes part is the aesthetics definition of the variables for the plot; geom_point defines the type of chart (scatter plot), and college is the data set.

I completely failed to get anything at all out of the challenge in the 5 minutes we were given for this task. My code just didn’t produce any kind of plot, just barffing errors at me. This was entirely down to my inability to type or read carefully what I had typed. Later, I managed to make some progress:

Time is not in abundance at the moment, so I did eventually just look at the solution and run it, seeing how each element of the code contributed to the final result. Here’s my result: 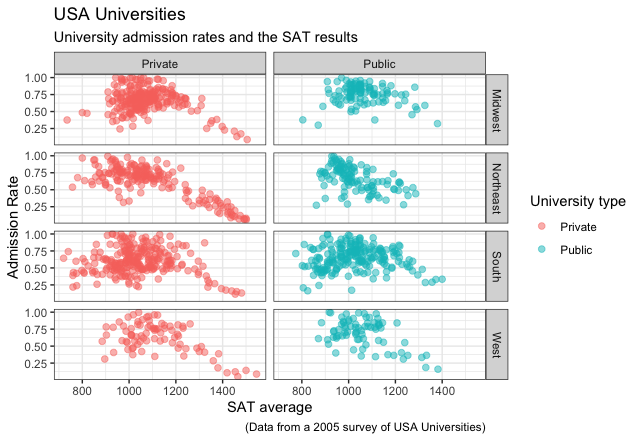